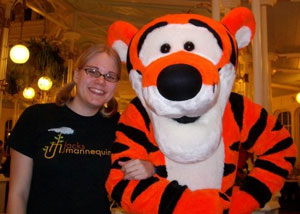 Terese Kreifels graduated from Bradley University (Peoria, IL) with a B.S. in Chemistry in 2009.  While there, she studied the mechanism of the decomposition of N-nitrosoamides with Professor Kurt Field.  During the summer of 2007, Terese studied soy bean oil as a potential steel lubricant additive at the USDA National Center for Agricultural Utilization Research.  Additionally, in 2008, she was a LANDO Summer Research Fellow at the University of Minnesota, where she investigated carboxylic acid initiated ring-opening polymerization under the supervision of Professor Tom Hoye.  Building upon previous McMahon group studies of triplet propynylidene (HC3H) and its isomers, Terese’s research focused on the synthesis, spectroscopic characterization, and photochemistry of triplet MeC3Me.  She also explored the MeC3Me energy surface computationally, using B3LYP/6-31G(d) and CCSD/cc-PVDZ methods.  Terese worked collaboratively on a project with Prof. Scott Reid (Marquette University), which aimed at matrix isolation of products produced through the reaction of triplet carbon atoms and unsaturated hydrocarbons.  Aside from chemistry, Terese’s interests include playing flute, letterboxing, and baking yummy things.  She is a huge fan of pancakes and IHOP.