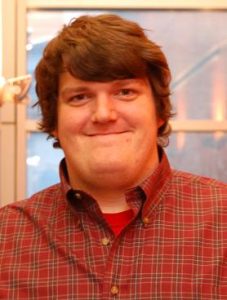 Alex Nolan received his A.B. in chemistry from Wabash College in 2008. During his time at Wabash, Alex worked with Professor Paul LePlae to develop a proline-based organocatalyst to use in a Michael Addition. During the summer of 2007, Alex worked on the total synthesis of Dolabelides A and B in the laboratory of Professor Paul Hanson at the University of Kansas. Alex worked toward the synthesis of a precursor of an enediyne, 1,2-diethynylcyclobutadiene. Enediynes can undergo a Bergman cyclization either photochemically or thermally to produce a p-benzyne structure. Alex collaborated with Brian Esselman and Andrew Wiederhold investigating the computational side of diethynylcyclobutadiene and the rearrangements therein. In his free time, Alex enjoys golfing, listening to music, reading, and exploring the hills of Southern Indiana.