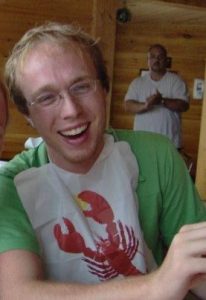 Christopher Shaffer received his B.S. in biochemistry in 2005 from the University at Texas at Austin, where he studied biradical cyclizations of aza-enediyne systems with Professor Sean Kerwin. Before his senior year, he worked under Professor Patrick Harran at the University of Texas Southwestern Medical Center on the synthesis of reduced sulfur natural products. During his time in the McMahon group Christopher has collaborated extensively with members inside and outside the group. In partnership with the USGS, Christopher has synthesized acetylenes and nitriles for spectroscopic comparison to data from the Cassini probe. In addition, Christopher collaborated with Brian Esselman in a search for diazirinone. One of Christopher’s goals was the synthesis, spectroscopy, and reactivity of MeC7H and HC7H carbenes. To meet these ends he is also explored new reaction methodologies for the synthesis of dibromolefins with Collen Sylvester. Christopher’s outside projects include an extensive survey of things found at the bottom of the ocean.